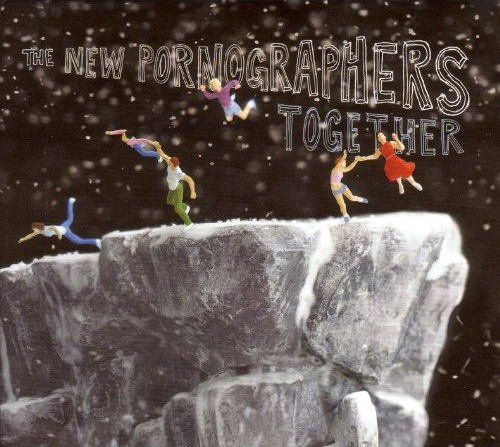 #16. The New Pornographers – Together

You’d be hard pressed to find a more consistent band than The New Pornographers. Each of the 5 LPs they’ve released in the past 10 years has been solid, if not fantastic, and the feat is immensely more remarkable when you take into account the litany of distractions they have in the form of side projects and solo careers. This is a busy, busy group of people, and yet they still find the time to bang out some of the best power-pop going today, again and again.

Last year’s Together is no exception.  In fact, one could make a case for it being a perceived return to form after 2007 subtle grower, Challengers.  And the “dip” was marginal, to be sure.  For evidence, I turn again to the tastemaking magnates at Pitchfork, who have scored the New Pornographers catalog thusly (in chronological order):  8.4, 8.1, 9.0, 6.0, 7.3.  Sure, that gawdy 6.0 for Challengers tugs the overall average down to a 7.8, but there are bands that would give their entire collective families over to indentured servitude to get just one 7.8 review from Pitchfork, let alone for a five-album average.

But the impressive part is that Challengers wasn’t even that mediocre.  It just took time to sink its hooks in, which was, in part, its condemning flaw: it was kind of… challenging.  After three records of mainlined pop bliss, it was hard to have patience with a band who we had come to except such instant gratification from.  How dare they craft an album in need of decanting!  Since when does this stuff need to breathe? Where are the shots?  We’re supposed to be doing some shots!

It’s a bold move for a band to deliver the “grower” in this day and age, as the only audience willing to stick around for the blooming period tends to be the diehards in denial of their disappointment, eventually rewarded for their patience.  The rest of the fickle, musically insatiable masses tend to turn their nose up at complex flavors requiring a roll on the proverbial tongue, preferring the newest rehash from the Taco Bells of the music world.

The real genius of frontman Carl Newman and his collected cohorts is their ability to spice up the fare without shaking up the formula.  In fact, here’s a fun game to play with your fellow music nerds:  Put all five New Pornographers LPs in a playlist, hit shuffle, and see who can name which album each song is from first (one guess per player, per song).  Upon a correct answer, skip to the next track (otherwise you’re in for a 3 hour and 48 minute marathon).  Keep track of the score, of course.  And then you could do ‘Loser buys next round and winner doesn’t pay for another drink’… (if you’re playing at a bar, which, I don’t know what bar would let you play that game, so…)  And yeah, so I just made that up, but the point is that its tricky.  They’re so stylistically consistent, but while remaining consistently good.  If you do, for some reason, try that game out, make note of how many times someone says “Ugh, I hate this song.”  Chance are, you won’t have to write anything down.

But I think maybe the group learned their lesson from Challengers’ icy reception.  No more taking it slow, no more subtle entrance, no more “growing”…  Right out of the gate, Together makes it’s presence known with the cello-guitar riff stomp and riding piano plink of “Moves”, the album’s opener.  “Crash Years” follows, with the classic New Pornos staples of Neko Case’s bell-clear vocals, dutiful acoustic strums, tambourine accents, and tom-heavy drumbeat.  The low-end strings enjoyed an elevated profile here again, as is the case for the album as a whole, and to great effect.  While strings have long appeared in the band’s catalog, here they forego their role as atmospherics and take on a much more sinewy texture, often playing the part of connective tissue within the musical arrangement.  Dan Bejar makes his token appearances on “Silver Jenny Dollar”, the climaxing “If You Can’t See My Mirrors”, and triumphant album-highlight “Daughters Of Sorrow”.  Elsewhere, the punchiness of “Moves” is echoed in the chugging “Up In The Dark”, followed two songs later by the equally bombastic “A Bite Out Of My Bed”.

In all, Together may not outshine the band’s first three offerings, but it seems that they’ve found a way to bridge the gap between the explorative textures and arrangements of Challengers and the immediacy of their earlier catalog.  The final result doesn’t exactly qualify as groundbreaking experimentation, but that’s not really what anyone would expect, or moreover, want, from a band who’s sound is so unique and established.  After all, it’s their consistency that has kept them relevant and loved for the past decade.  As much as they may want to stir things up a bit (and they should, so good for them), they’ve become keenly aware that, for every musical detour they take, they had better not stray far from the entrance ramp to the power pop expressway, lest they get totally lost, and be relegated to the irrelevant banality of the endlessly generic indie rock sidestreets.