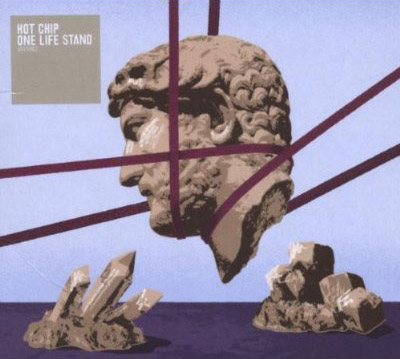 Hot Chip has always been the kind of band that sounded pretty much like you would think they do:  An overheated microchip with its plastic board bubbling; transistors buzzing, cracking and popping in an infectiously cyclical rhythm; simple binary messages chopped and stuttered, the otherwise smooth current of the circuit now glitching.

On last year’s One Life Stand, however, Hot Chip sounded more like… Smooth Chip.  Gone were the more frenetic clipped-out synths and caffeinated dance beats of 2008’s excellent Made In The Dark. In their place are cool, round sine-wave tones, string pads, and the persistent, pulsing thump of the kick drum.

It’s that kick drum, however, that keeps this in the same ballpark as their previous work – the majority of the album is still very danceable.  It’s just not preoccupied with  being “ready for the floor” this time around.  Alexis Taylor still sounds like the coolest choir-boy dropout in the world, laying his soft, satin croon down over the consistent groove, and it’s when the groove leaves that the band loses its edge.  In fact, the only two songs on One Life Stand that don’t employ a quarter-note kick pattern at least somewhere in the track (the pretty-but-forced “Slush” and misguided “Keep Quiet”) also happen to be the two weakest songs on the album.

The remainder, however, is sublime.  “Thieves In The Night” sets the tone of the album with a propulsive pulse and gurgling synth arppegiations, underscoring Taylor’s calm, lilting vocals.  “Hand Me Down Your Love” takes the tempo baton with a double-time snare stomp and percussive keyboard stabs, injecting pitched-up vocals in a response to Taylor’s lead, resulting in a track that could have found a home on Yeasayer’s Odd Blood from last year.  Later, the warbly Rhodes of “Alley Cats” unfurls under a delicate duet between Taylor and bandmate Joe Goddard, building to a glossed-over, blissed-out chorus.

In all, the album isn’t a total departure from the band’s previous efforts, but rather a group of musical mechanics crafting a different machine with the same set of parts and tools.  Less concerned about the pulse of the nightlife, Taylor here turns his focus inward, as on the title track: “Moments keep us guessing \ And lead us from temptation \ But better to embrace them \ And measure our relation”. On the chorus, he offers, “I only wanna be your one life stand. Tell me, do you stand by your whole man?”  The maturation in lyrical focus is reflected in songcraft and instrumentation, and on a whole, the band as a unit sounds like it has grown up a bit – more efficient, restrained, and deft in execution.  Some may worry that Hot Chip has lost their “pep”, but that assertion would be assuming that unbridled energy trumps a steady voice with something to say – a sentiment that I, for one, would disagree with, especially in this case.  Hot Chip seem to have aged nicely like a smooth, fine wine.